The Custom Control saves the Builder from having to manually insert an email label, a text input and another label displaying each time - instead, another instance of the Custom Control can be created. This pattern makes it convenient for a Builder to build modular, reusable, Web Controls instead of adding each set of Web Controls manually and duplicating the desired logic.

Like Web Pages, Custom Controls can have variables defined within them to store data. However, unlike Web Pages, care must be taken to ensure that the correct type of variable is defined (in addition to selecting the intended Data Type) depending on the intended use. It is important to note that this is not referring to the Data Type assigned to the variable. 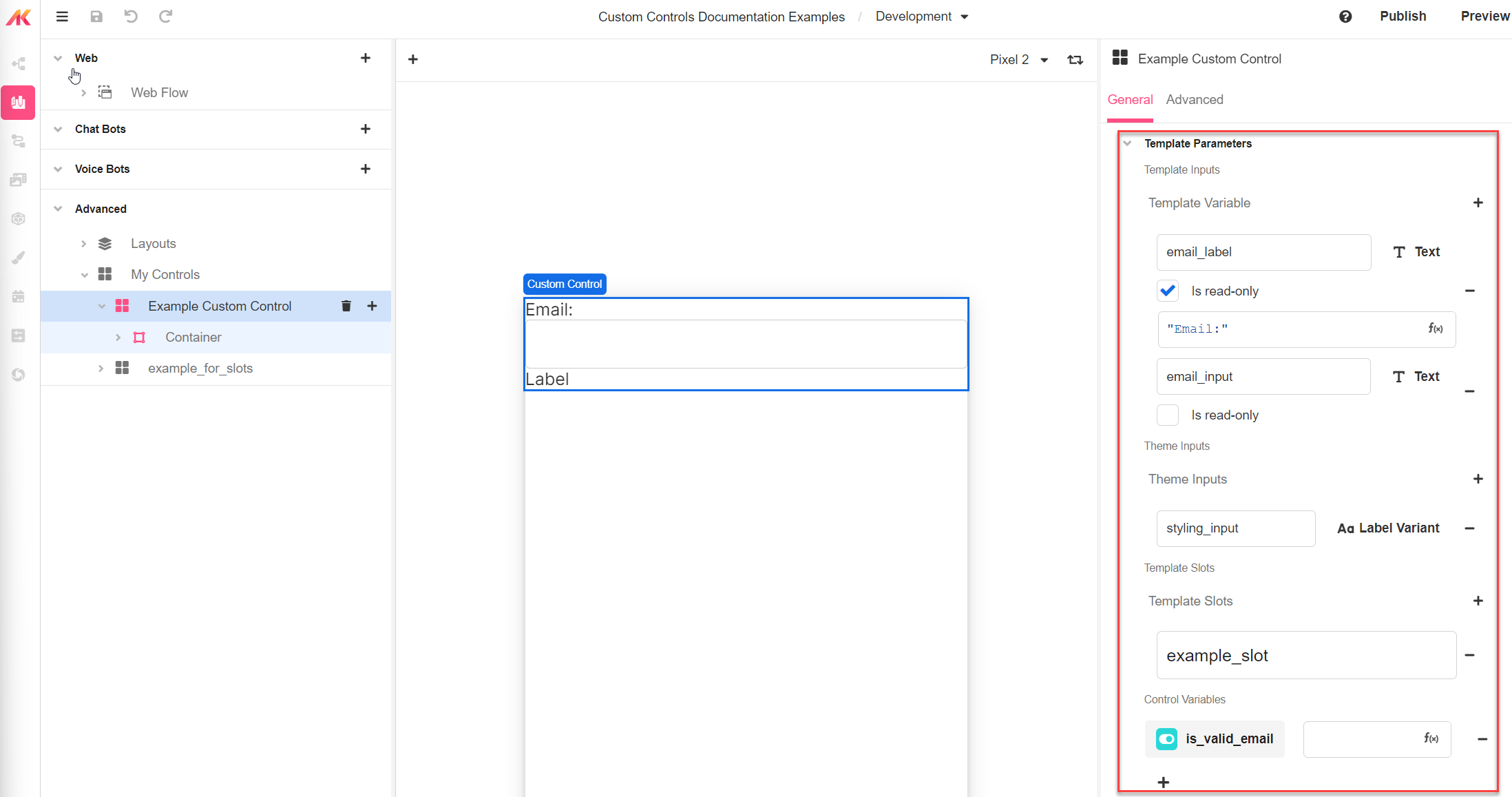 These are variables that can accept inputs from outside each instance of the Custom Controls. This is the desired variable type where data needs to be passed from the Web Page or Web Flow into the Custom Control.

In the below example, a variable named email_label has been created which expects a Text data type and if not passed any data, contains the Text of "Email:".

It should be noted that the Is read-only property determines whether or not the data within the variable can be modified after first receiving data.

Second, the Theme Input variable must be passed to the desired Web Control which can be accessed using the input. namespace.

Third, the Variant Substitution must take place on the instance of the desired Custom Control under the style object.

Template Slots allow for Web Controls to be added within instances of a Custom Control.

As the name implies, the Template Slot behaves like a Container - other Web Controls can then be created within it. To achieve the aformentioned functionality, a builder must follow these three steps:

Second, add the Template Slot on the instance of the Custom Control.

Third, add the desired controls to the new Template Slot

Control Variables are useful when a Builder only seeks to store data pertaining only to functionality within the Custom Control that does not need to be accessed outside it. 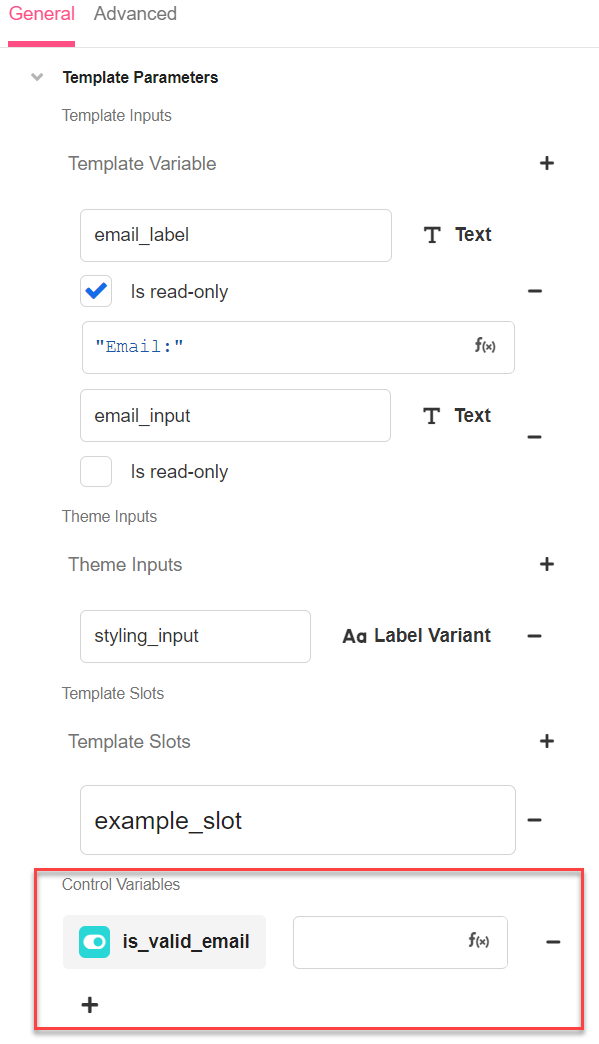 An example of this would be a variable used to store whether or not the input on a text input is valid - this fact is unlikely to be relevant outside the Custom Control as it is only used to display a warning label within the Custom Control without serving any other purpose.

When working with Custom Controls, its helpful to understand the difference between defining the Custom Control and instantiating a Custom Control.  For those who are familiar with Object Orientated Programming, this pattern is similar to defining Classes and creating instances (Objects) of them.

Custom Controls are defined in Studio under the Advanced Tab within the Tree. 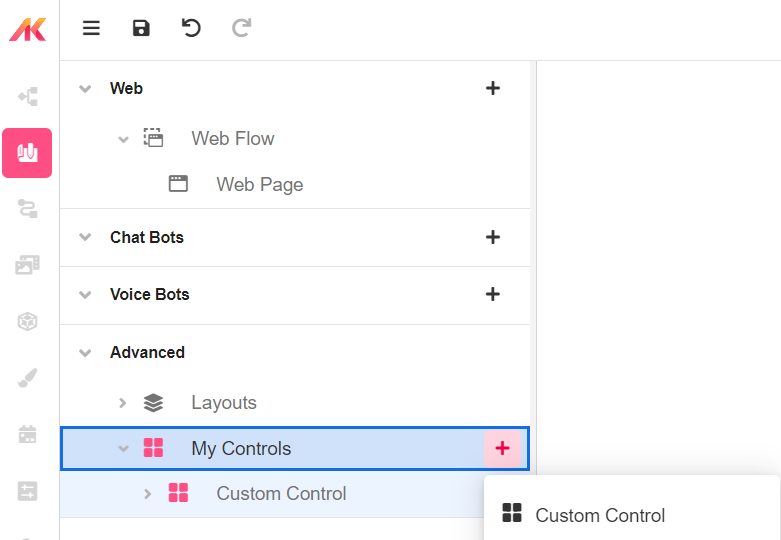 A new Custom Control will appear with a container, in which Web Controls can be defined . This is similar to to how Web Controls would usually be added to a Web Page. 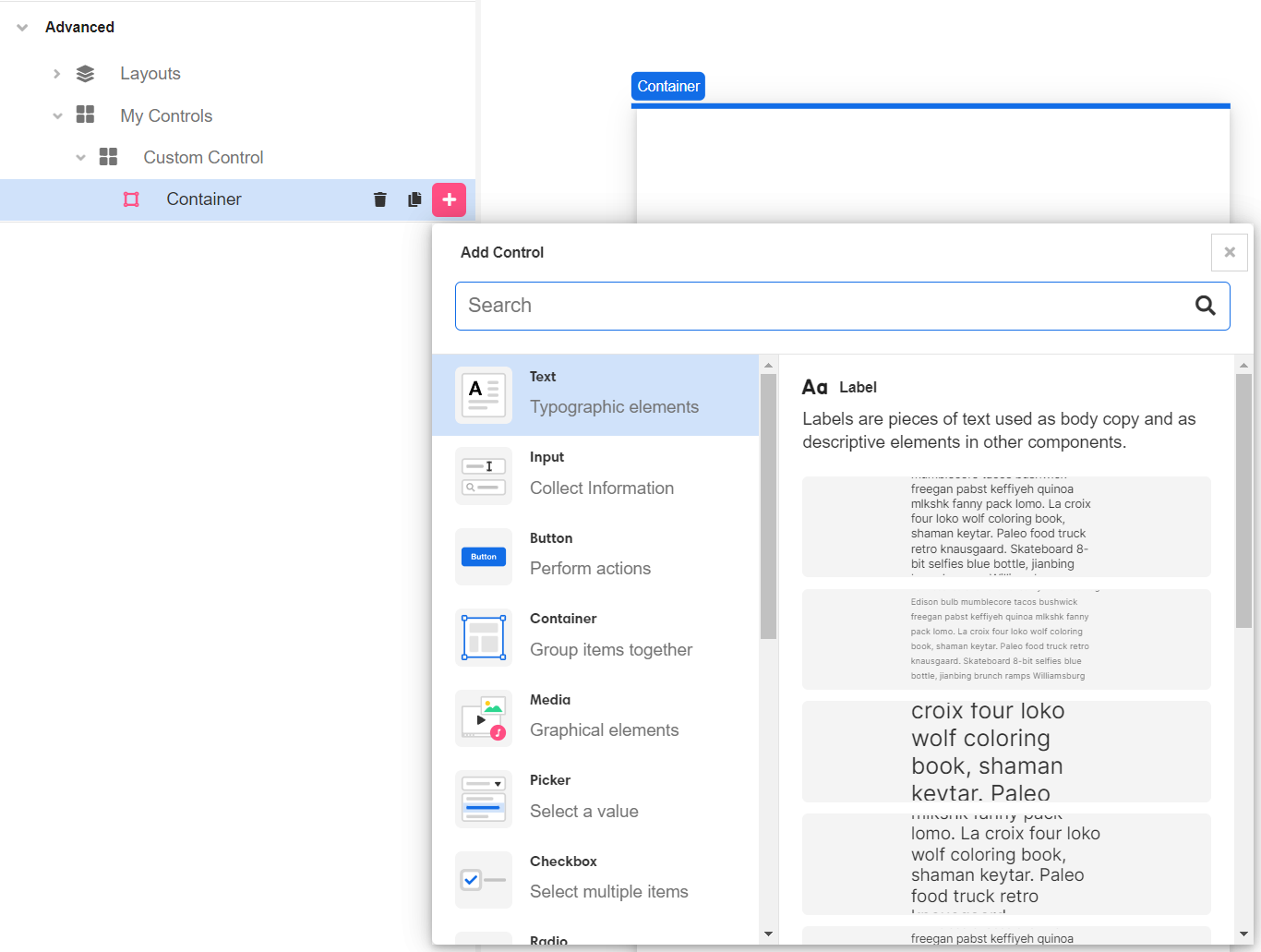 After Custom Controls have been defined, instances can then be created in the same way as conventional Web Controls under the Custom category when adding Controls on a Web Page.

The following example shows the creation of a basic Custom Control which contains three Web Controls and some inputs:

This Custom Control will also accept styling Variants so that the App Builder can ensure that it fits the application's styling.

Next, program the first Label to display the text of "Email:" and accept inputs for it to be customized for each instance. Select the Custom Control on the Tree and add a Template Variable and name it email_label and pass the value of "Email:" to it.  It should be noted that the Is read-only value simply means that once the value has been set, it cannot be modified.  Use the expression editor for the label within the Inspector to pass the email_label variable to it.

Pass a name for the variable into the Name field and call it styling_input, for example.

Next, add a Control Variable to mark whether or not the value is a valid email address. Keep in mind that Control Variables cannot be modified from outside the Custom Control and should only be used for locally-needed values. Our case of is_valid_email is a good example of a value that only needs to be known locally within this Custom Control. 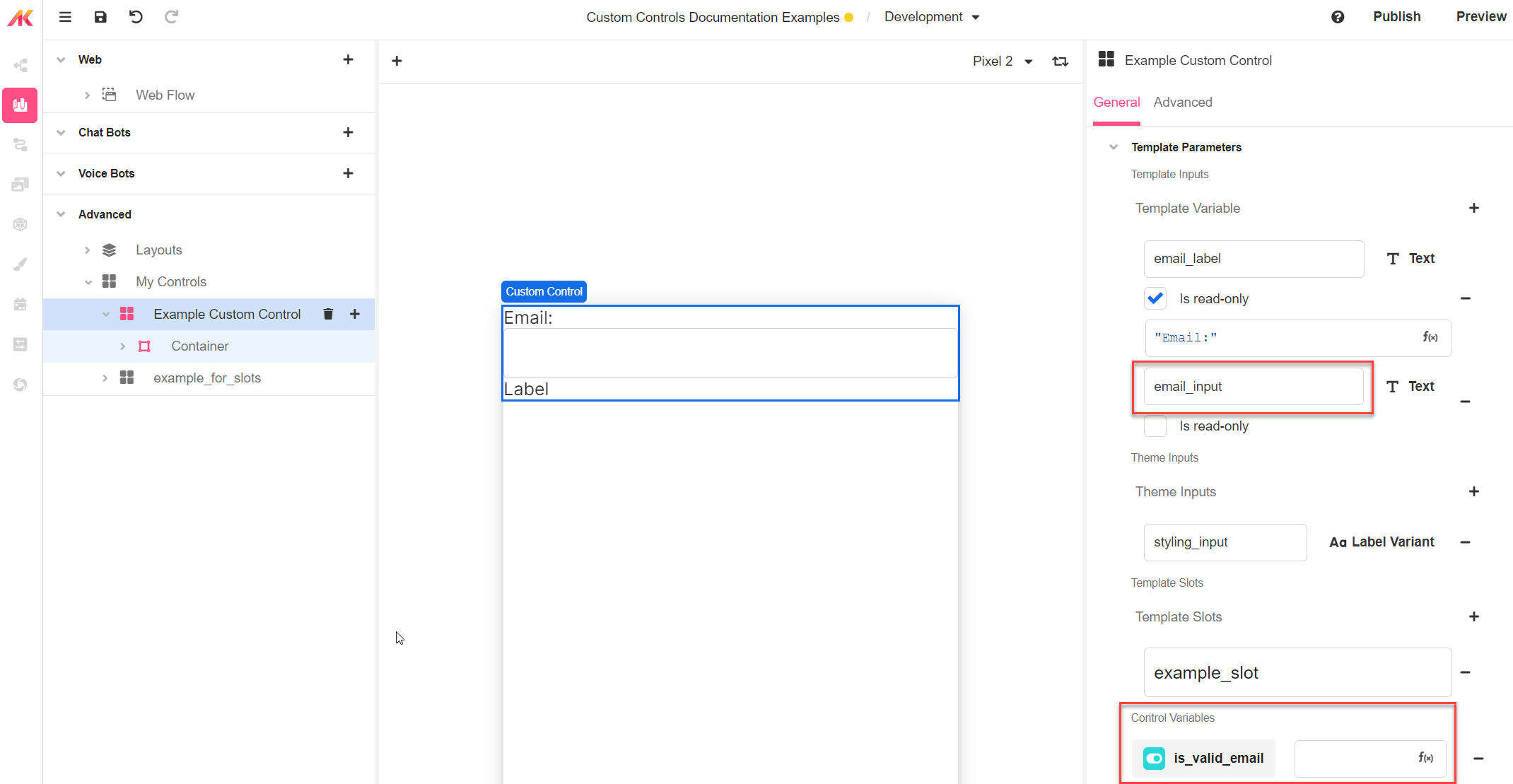 The text input should then be bound to the new email_input  Template Variable by selecting the Text Input on the Stage or Tree and setting the Data Binding value to email_input. Note that Airkit's auto-complete will provide you with the list of available variables within the scope of the Custom Control.

Next, change the styling of the warning label so that the text appears red in color (2g)

Next, set the Is Visible property to change the text to be "Enter valid email address".

Next, program the Text Input with a Set Variable action the input On Blur (when the app user clicks away from the Text Input) with the code of IF(ISEMAIL(email_input), TRUE, FALSE) 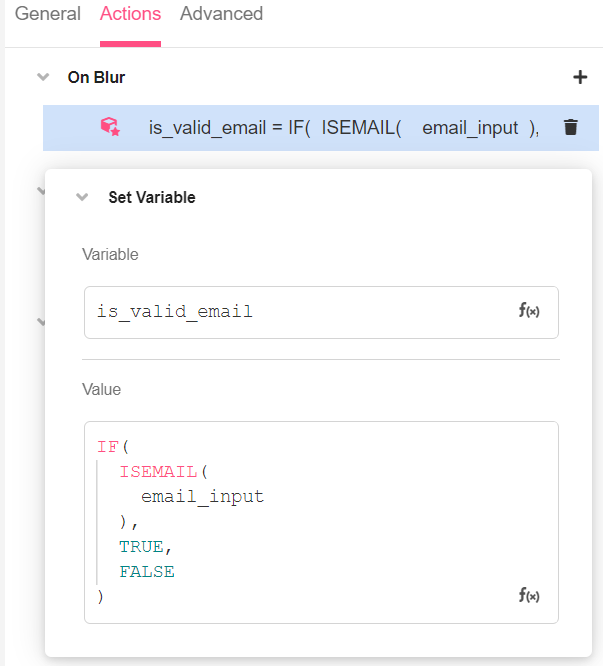 Once all of this has been set, multiple instances of this Custom Control can be instantiated within the Airkit App.

Newly created Web Controls are set with the selected Variant upon definition.  In many cases, Web Controls only have one, default Variant.

Custom Controls can also receive Variants within Theme Inputs (see above) which must be defined under Template Parameters > Theme Inputs. In the below example, a input variable of label_example has been defined for the Custom Control.

This allows for a styling Variant to be passed to each created instance of the Custom Control, as shown in the below example.