The Chat Bots Builder provides the tools to create SMS experiences. This is the Builder you'll use to script outgoing texts and define how returned texts will be parsed and responded to.

Displays an expandable and collapsible breakdown of the various components that have been built out as part of an SMS experience, including each individual Chat Bot and its component Decision Menu and Text Response Capture elements. The Tree also provides the option to add additional components: clicking the '+' icon that appears when you run your mouse over a listed component provides the option to add a subcomponent that will be nested directly under said branch.

The Tree also enables the addition of two other components, which can nest under either Decision Menus or Text Response Capture:

For a more detailed discussion on how to work with the various component parts of a Chat Bot, check out Creating a Simple Chat Bot.

Displays a visual representation of the various components that make up an SMS experience. Exactly what is displayed in the Stage varies to better communicate what component of the SMS experience is being examined. For instance, when examining any part of a Decision Menu, the Stage will display the outgoing text, the associated decision options, and the default response, like so: 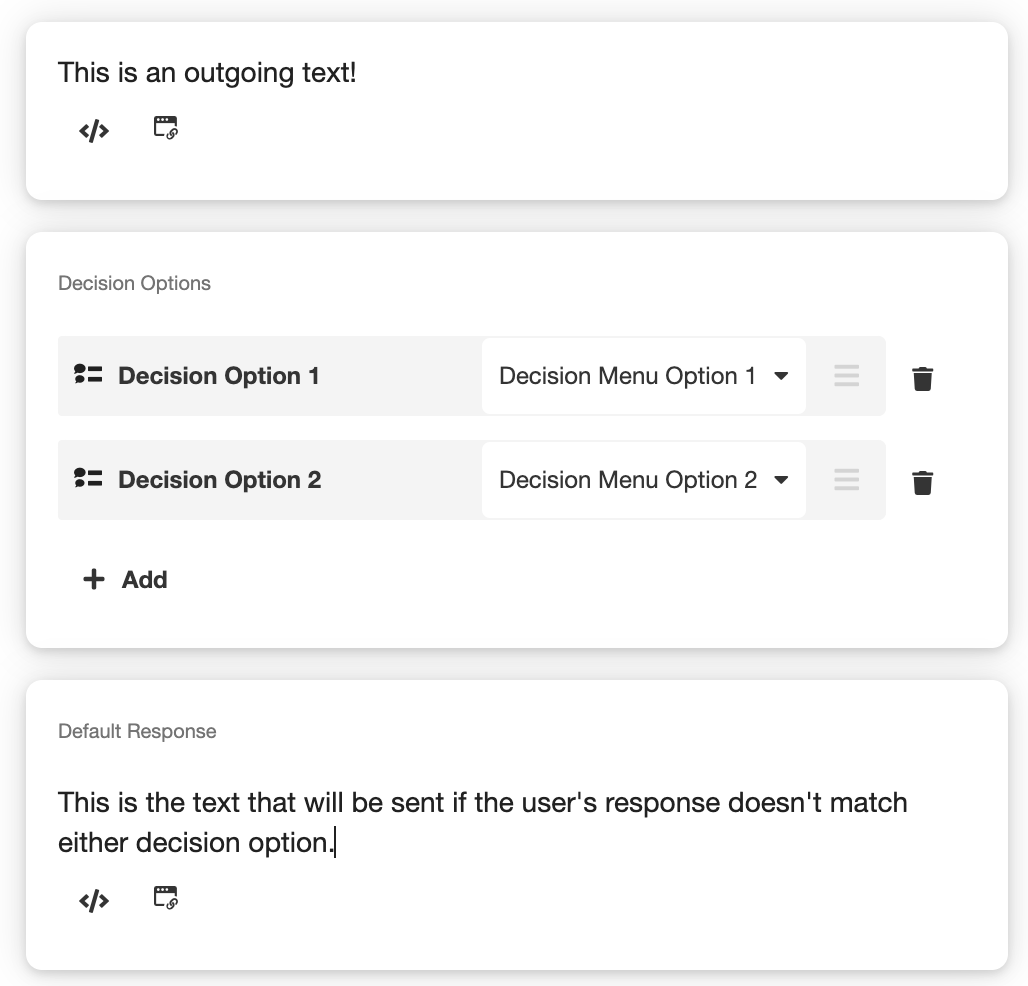 On the other hand, when examining any part of a Text Response Capture, the Stage will display only the outgoing text and the Decision Menu or Text Response Capture that the user will be directed to once they have given a response that will be saved as the value of a variable:

When creating SMS experiences, bear in mind that Airkit won't allow for the sending of the same text message to the same phone number multiple times within a 30-minute period.

In both cases, outgoing or potentially outgoing texts can be edited directly in the Stage by clicking on the relevant text and making the desired edits.

For a more detailed discussion on how to work within the Chat Bot Stage, check out Creating a Simple Chat Bot.

Provides the tools to examine and modify the individual elements that make up an SMS experience and configure specific interactions associated with those elements. The layout of the Inspector will vary depending on the functionality of the element being inspected. 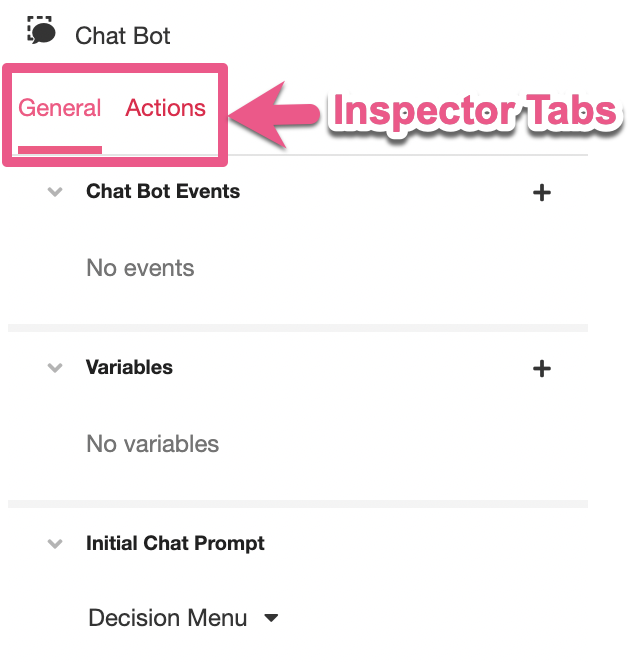 In general, there are two tabs that may appear in the Chat Bots Builder Inspector: General and Actions. (Not every element will allow you to access both tabs while being inspected, because different elements allow different modifications.)

Contains the fundamental information associated with the element being inspected. For instance, if inspecting a Chat Bot, the General Tab will display relevant Events and variables, as well as the initial text prompt sent by the Chat Bot. If inspecting a Decision Option, the Inspector will display all potential incoming texts that the Decision Option will accept, and clicking on the '+' icon to upper right will add another.