The Theme Builder provides a way to make stylistic changes that apply across your entire application, ensuring consistent styling throughout each user's web Journey.

The Tree is where you'll find an expandable and collapsible breakdown of the many Variants that can be edited within Theme Builder. What you select in the Tree determines what is displayed in the Stage and Inspector.

The Tree is nested as follows:

At the top level of the Tree is the Theme. You can only ever have one Theme in the Theme Builder at once, though it can be useful to name Themes when exporting them from and importing them to other applications, as this can help you keep track of precisely which theme you're working with at any given time.

Working at the Theme level of the Tree also allows you to set defaults that will impact the Variants of multiple Web Controls, such as the default color pallet and default fonts.

Making stylistic changes at the Theme level makes it easier to maintain consistent styling throughout your app and makes it less cumbersome to modify individual elements. The following example shows how changing the default color palette impacts Variants of multiple Web Controls at once:

Nested under the Theme is every Web Control that you can style. Working at the Web Control level allows you to see all Variants of that Web Control side-by-side in the Stage.

The following example shows all of the different Variants of a Button Web Control. Note that all four Variants are displayed in the Stage, while the Inspector is left blank – there are no direct changes that can be made at the Web Control level: 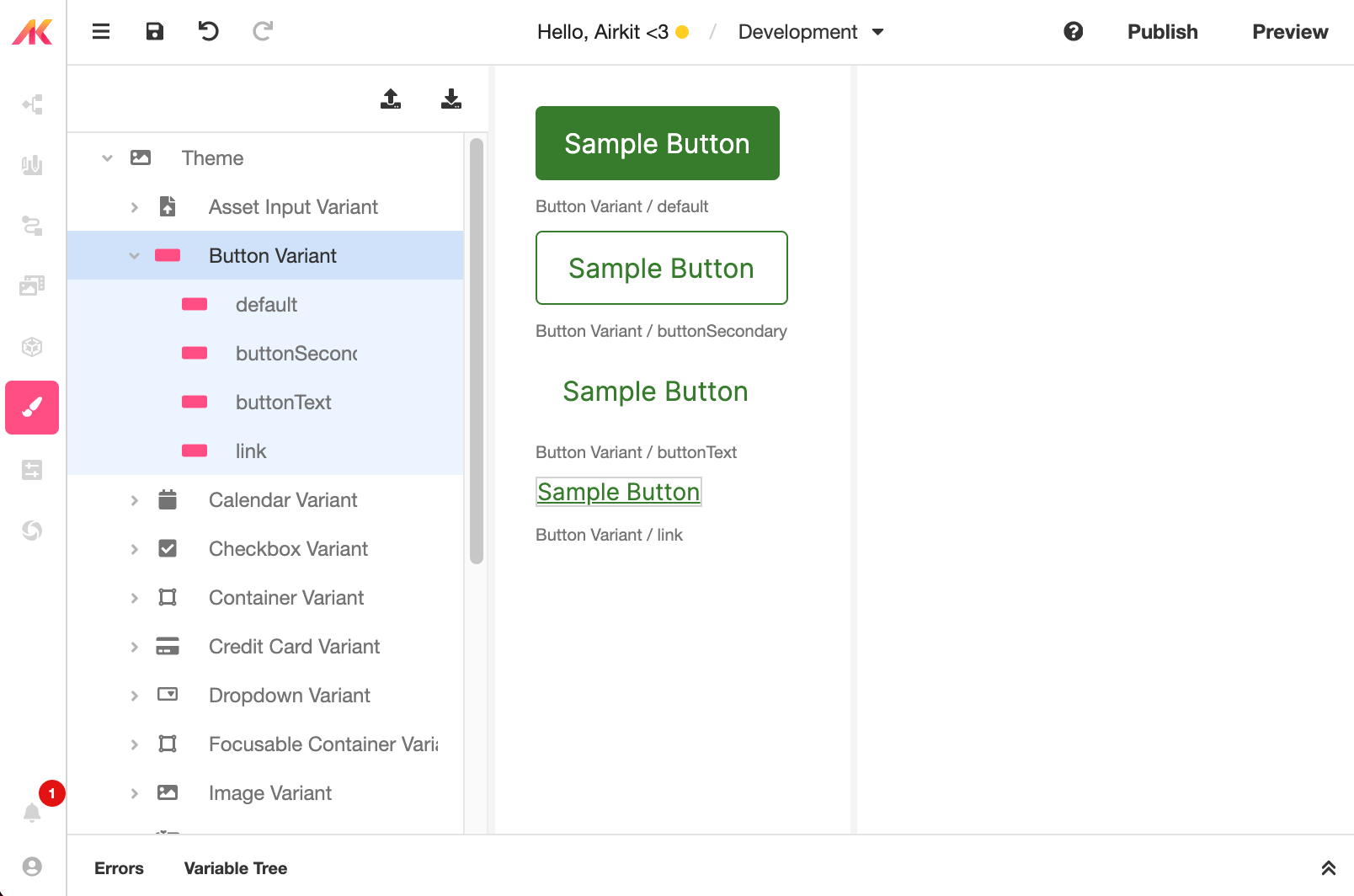 Nested under the Web Controls are all the different Variants of each. Working at the Variant level allows you make stylistic changes to that Variant and see the changes as you make them.

The Stage displays how Variants will appear to users. Any stylistic changes you make will be reflected by what is shown on the Stage, allowing you to see the results of your changes in real time.

The following example shows how the Stage reflects changes being made to the boarder of a Button Variant in the Inspector:

The Inspector is where you define how Variants are styled. Exactly what styling options are available to you will depend on what you've selected in the Tree. Changes made in the Inspector will be immediately reflected in the Stage. You can also toggle over to the Web Flows Builder to see how your changes appear as part of your broader UI. (Remember: stylistic changes made to Variants apply immediately to all instances where that Variant was used in an app.)

The following example shows what it's like to toggle from the Web Flows Builder to the Theme Builder, make a style change – in this case, changing the font associated with the default brandPrimaryFont – and then see that stylistic change reflected after toggling back to the Web Flows Builder:

For a deeper dive into the sort of stylistic changes that can be made in the Inspector, check out Common Style Properties of Web Controls.