The Connection Builder is designed to be your gateway to the outside world, as well as the place where you can design complex data interactions. It's the Builder that makes it easy to use and modify data, both internal and external. 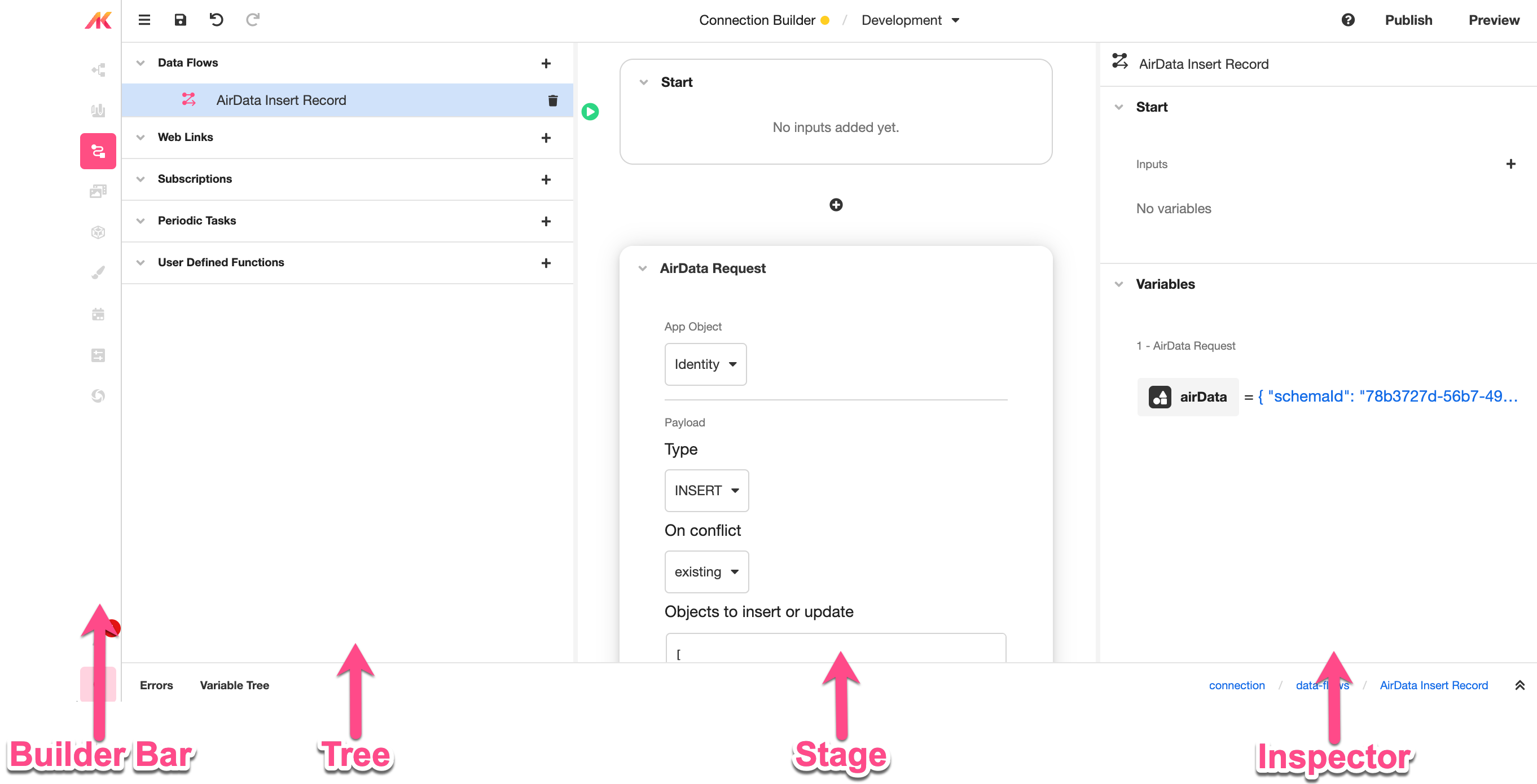 On the other hand, when examining a Web Links, all relevant information is displayed in the Stage, and so there is no need to access the Inspector:

The Inspector is where you can examine and modify details associated with Data Flows and Periodic Tasks. The Inspector will not appear when examining Web Links or Subscriptions, as all relevant information is displayed in the Stage.

Data Flows are custom connections. Conceptually, Data Flows work like functions: they take in input, process it, and return the resulting output. Once a Data Flow has been built, it can be initiated as a Periodic Task (see below) or as an Action within your application.

When working with Data Flows, the Stage is where you'll see and build out the individual connections within. Upon creating a new, custom Data Flow, the Stage appears as follows. The top box, Start, keeps track of the input the Data Flow requires and the bottom box, End, is where you'll declare which of the internal variables the Data Flow will return. Note that, as this newly-created Data Flow is blank, no input is defined, and there are no return values to choose from. Also note that there is no way to add input values within the Stage; keeping track of the variables a Data Flow has access to – including the direct input – is the domain of the Inspector:

In the process of creating and editing Data Operations within a Data Flow, it is a good idea to test how they run to ensure they work as intended. This can be done by clicking on the 'Run' button within a Data Operation. Often, however, a Data Operation requires access to other variables – most commonly, direct input – in order to run. To streamline the process of testing, dummy input can be defined directly in the Stage. Once the required input has been defined in the Inspector, example input of the correct data type is automatically generated. This dummy input can be both examined and edited in the Start box, and when individual Data Operations are run, they will use the dummy values in place of the input variables:

When Data Operations are built out, relevant variables will be auto-generated to account for their output, which can be used as input in downstream Data Operations. The more complex a Data Flow, the more of these variables will be generated, making it important to designate precisely which one is the desired output of the Data Flow as a whole. Once a Data Flow has been fully built out, you can specify which internal variable it will return by selecting the desired output from a dropdown menu in the End box.

For more on how internal variables are generated and how dummy values are stored for the sake of testing, see the Inspector section.

When examining Data Flows, the Inspector displays the relevant internal variables. These are separated into two expandable and collapsible sections: Start, and Variables.

The Start section in the Inspector is where you can define input that the Data Flow requires. This is done by clicking on the '+' icon to the right of 'Inputs' and selecting the desired data type of the additional input. Upon creation, you will be directed to name the input variable, after which a dummy value of the correct data type will be attributed to the variable for testing purposes. This dummy value will not be accessible outside of the Connection Builder; it will certainly not influence the behavior of the Data Flow when used as part of your app. It will only be used when a value for that variable is required in order to test Data Operations within the Web Flow within the Stage.

The following example shows how to add a number input, named input_number, to a Data Flow. Note that input_number is automatically set to the value '1' for testing purposes. This is not because the number one has any particular significance in the context of this Data Flow; it is only because 1 is an arbitrary Number, and thus makes a passible dummy variable.

Upon their creation, dummy variables can be changed in the Stage, in the Start box.

The following example shows what appears in the Inspector after a Transform Data Operation has been added has been added but before it has been run. Note that the automatically-generated variable, called transform, is present but undefined:

Once the Transform Data Operation has been defined – in this example, so that it outputs the sine of input_number – and run, the value of transform will change to reflect that: 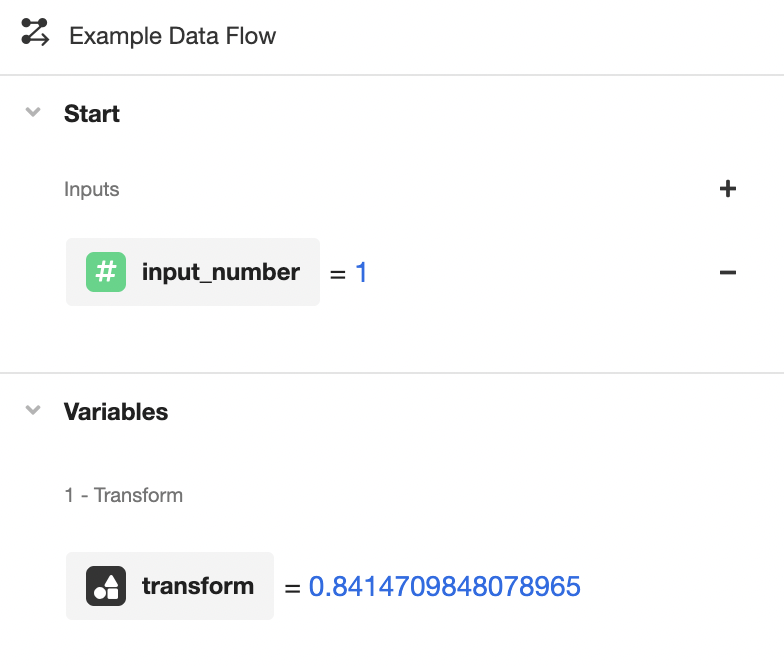 When downstream Data Operations call upon the `transform variable, they will, when run for testing purposes, use the value 0.8414709848078965 – at least until that value changes as a result of the Transform Data Operation being modified and run again to yield a different result.

The Web Links section allow you to define Web Links and App APIs that can be incorporated into your application. These can be made into Events, including Starting Events, which trigger the start of a Journey.

When working with Web Links and App APIs, the Stage can be used to view and modify what the link or the API call fundamentally is. You can define the URL associated with a link, designate the exact HTTP request that will be sent to an API, and access the details of Journey Mapping.

Subscriptions are a mechanism by which Airkit apps can receive (and subsequently respond to) to data updates from external sources. These can be made into Events that influence app behavior.

When working with Subscriptions, the Stage can be used to view and modify the data source and the category of webhook. It can also be used to access the details of Journey Mapping.

When working with a Periodic Task, the Stage displays a log of all instances where the Periodic task has been run.

When examining a Periodic Task, the Inspector is where you can can view and modify the Data Flow being run periodically. You can select when Data Flow to run as well as when to run it.

User Defined Functions are custom functions made out of and parsable by Airscript. They can be used as part of an application in the same way as out-of-the-box Airscript functions can.

When inspecting a User Defined Function, you'll find the means to edit the details of the function name as well as the input it expects and the output it will return.