Testing Airscript expressions requires accessing to the Airkit Studio. It doesn't matter what application you have open within it: you can set up your tests directly inside of whatever large application you're working in, or you can create a new app entirely for testing purposes.

This article covers how to test, not what to test. For a deeper discussion into the syntax of Airscript expressions, check out the Airscript Quickstart.

Setting up a designated Data Flow to test Airscript Expressions 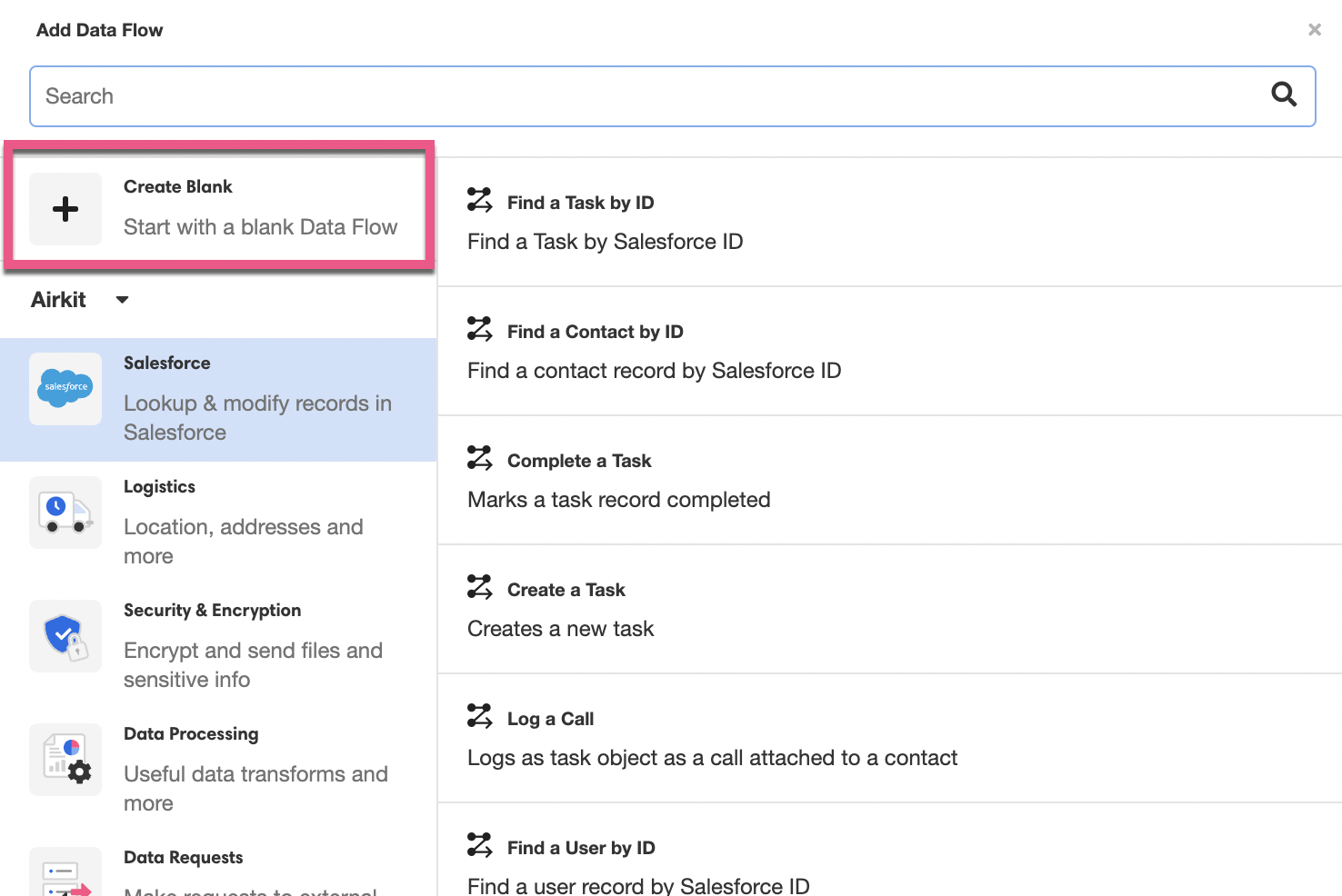 This will create a new, blank Data Flow. 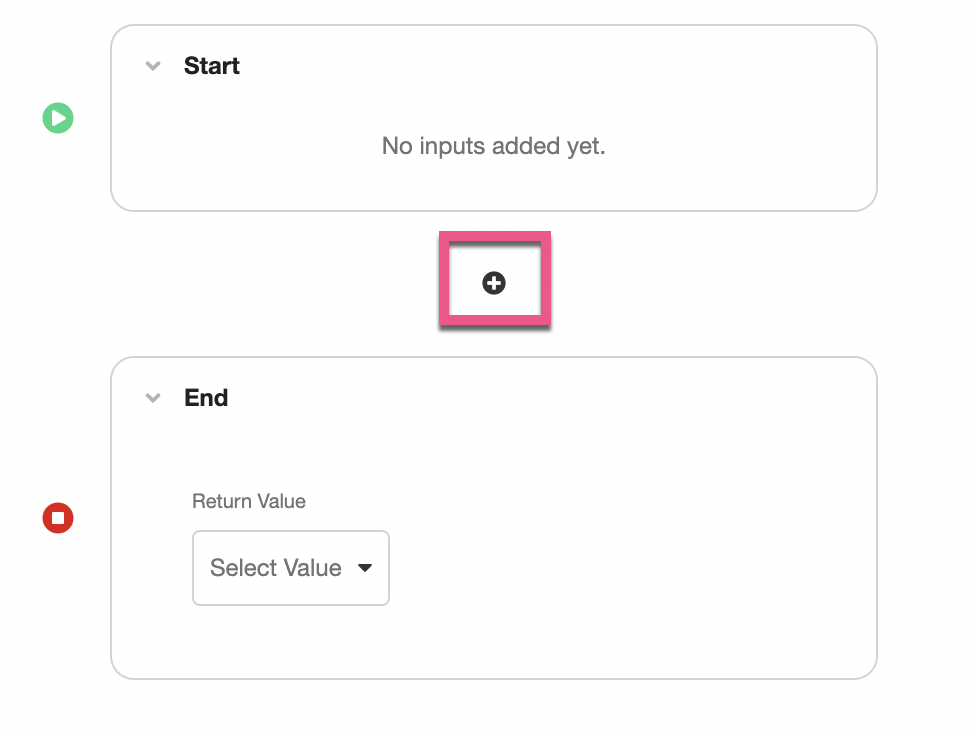 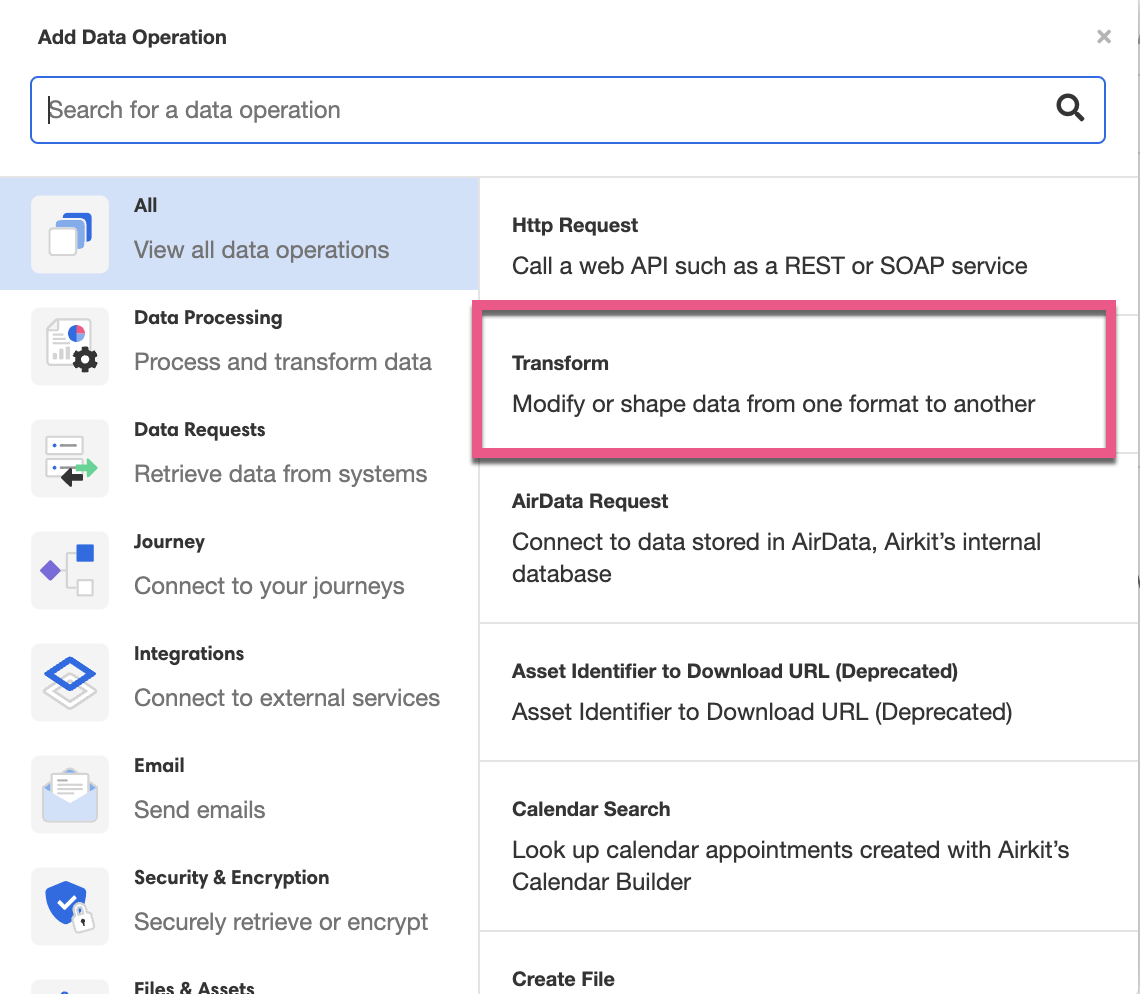 (Note that the output of the NOW function is a DateTime.)

Feeding input into an Airscript Expression

The NOW function does not require any input in order to run successfully, but many Airscript expressions do. There are two main ways to feed input into an Airscript expression: hardcoding, or calling on variables defined at the Start of the Data Flow. Any combination of these two options can be used if an expression requires multiple input parameters.

Airscript expressions can be tested by directly hardcoding the desired input into the expression. For instance, to use the ISODD function to test if the number 2 is odd, you could directly enter the expression:

Inside of the Transform Data Operation, this would appear as follows. Note that at the time this screenshot was taken, the expression was run, returning the output FALSE, as 2 is not an odd number. 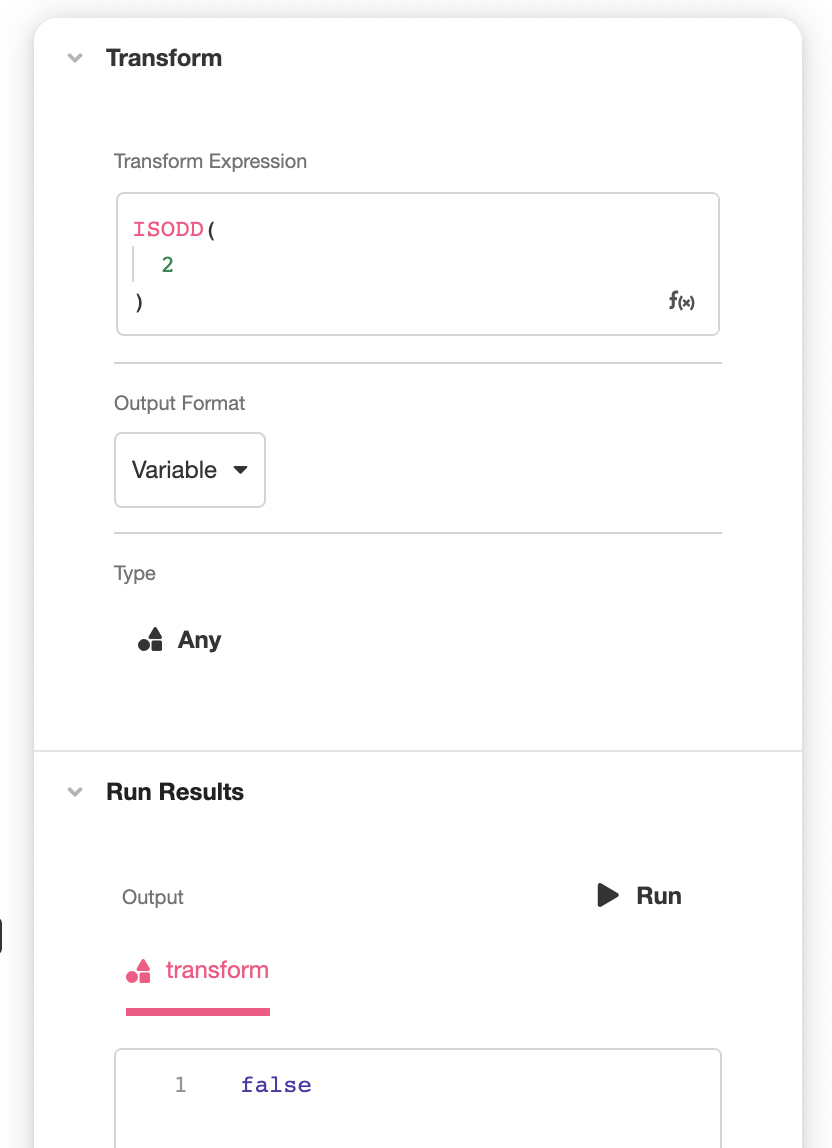 Most Airscript expressions expect input of a certain data type. All data types can be hardcoded, though some require particular signifiers to be Airscript-parsable. Text, for instance, must be designated by surrounding the relevant string with quotation marks. For a deeper dive into the different data types Airscript recognizes, check out the Data Types Overview.

The Transform Data Operation has access to all variables defined as part of the Airscript Testing Data Flow. When a Data Flow is first created, this section is blank, but new inputs can be defined in the Inspector, under the Start section. A Data Flow can keep track of arbitrarily many variables.

Click on the '+' icon to the right of Inputs to define a new variable:

Upon clicking on the '+', a pop-up window will appear. Select the Data Type of the variable you mean to use as input when testing your Airscript expression:

After defining selecting a variable type, give that variable a name by entering it in the text box that appears to the immediate right of the data type icon. This name will define how the variable will be designated when called upon by a downstream Airscript expression.

Upon their creation, variables defined in a Data Flow will be automatically populated with dummy data of the correct type. This dummy data can be both examined and edited in the Start box. Select which variable you want to examine at any given time by clicking on the variable names at the top of the Start box: 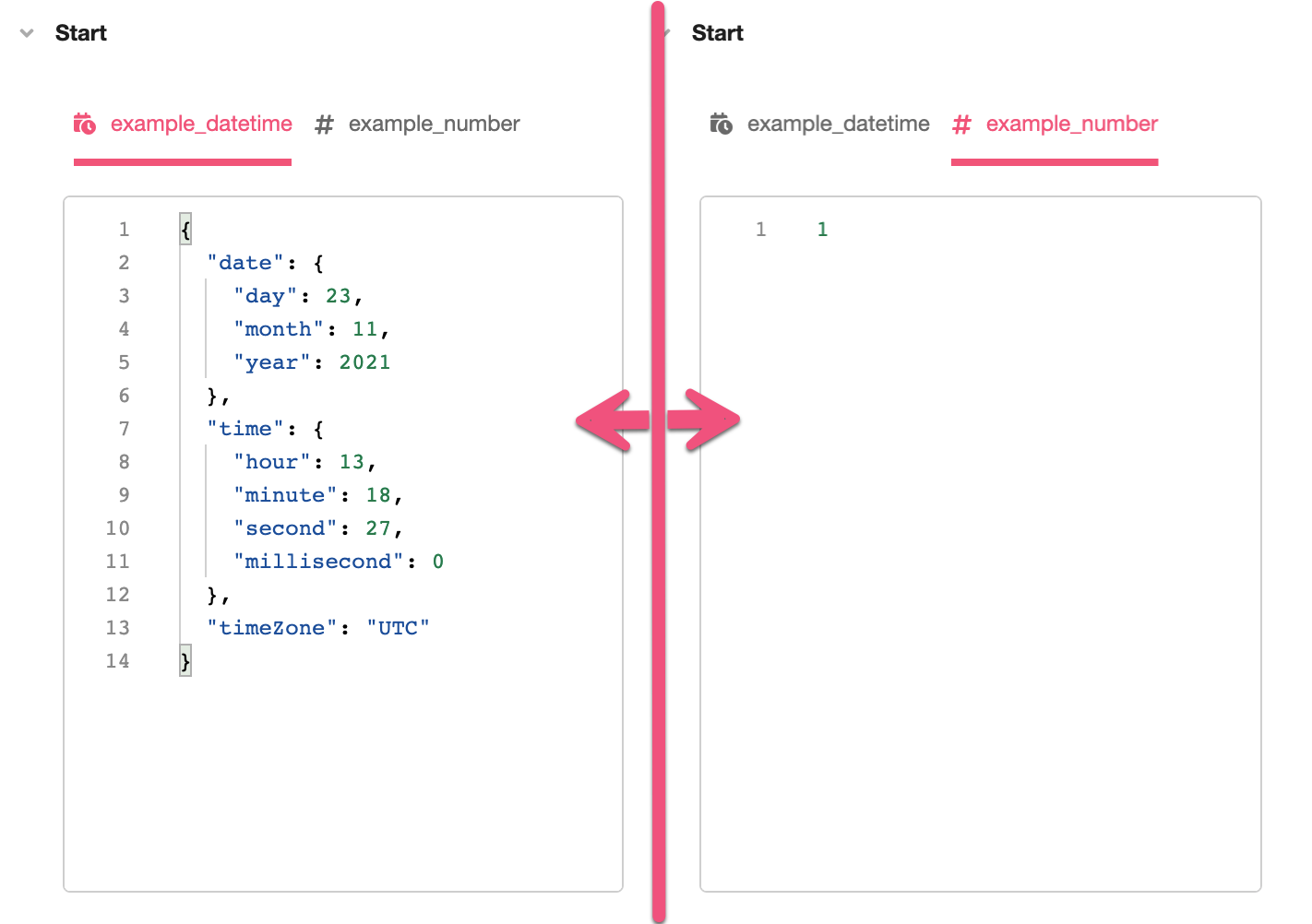 When the Transform Data Operation is run, it will reference the dummy values defined in the Start box whenever the variable is called upon.

These variables can now be called on within the Airscript expression in the downstream Transform Data Operation.

As an example, consider testing the function ADD_TO_DATETIME. This function requires a DateTime, a Number, and a string. The following expression uses the value of example_datetime as the DateTime, the value of example_number as the Number, and hardcodes the string "hour" as the value for the string. (Remember: any combination of these hardcoded and variable parameters can be used if an expression requires multiple input parameters.)

Running this within the Transform Data Operation yields the following results: 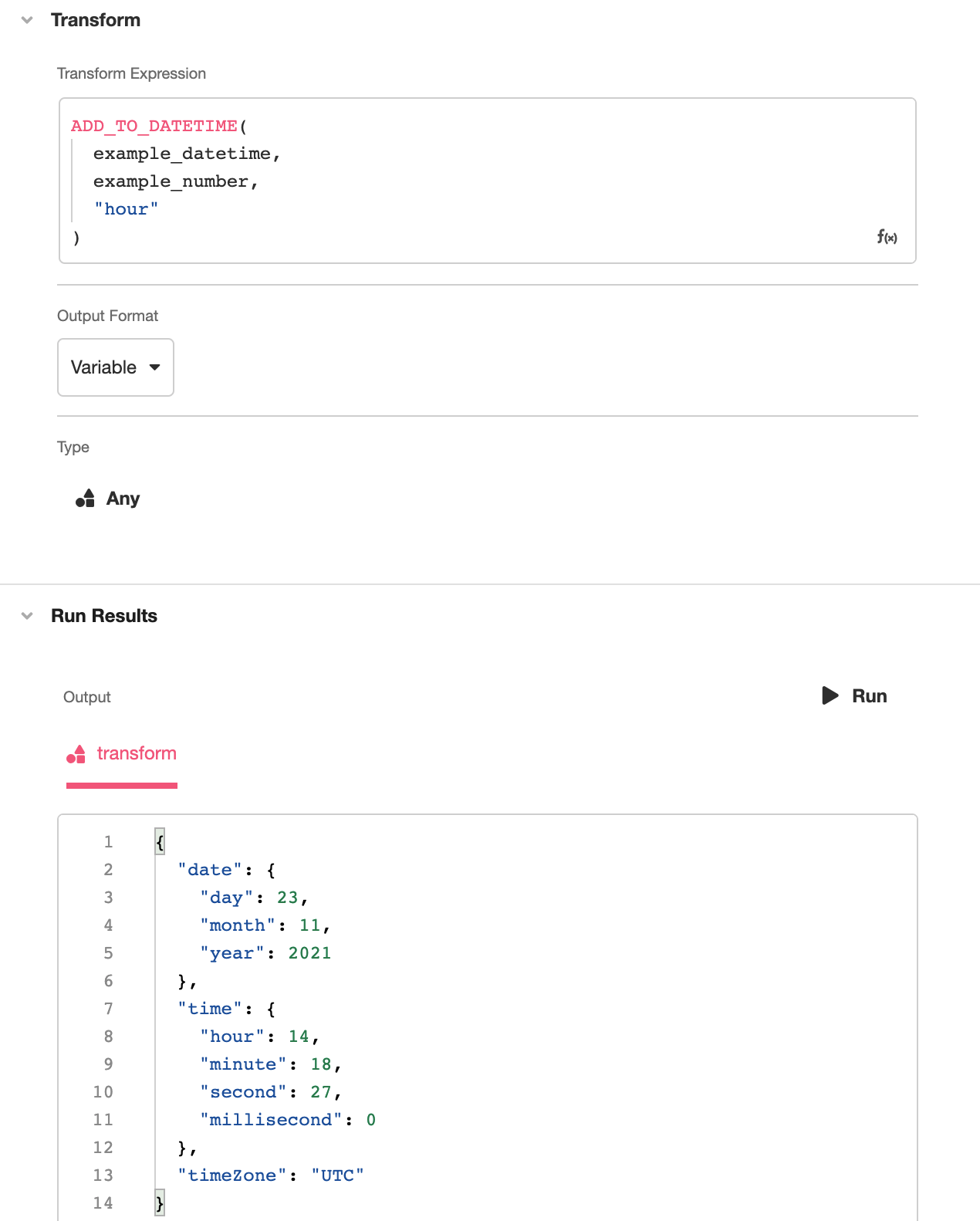 Changing the dummy values defined in the Start box and then running the Transform Data Operation again will return results that reflect the changes made. This makes it easy to test how Airscript expressions behave when given different values as input.

For more on defining variables in Data Flows, check out this article on the structure of Data Flows.

Airscript expressions can be used in a wide variety of places within your Airkit Application. Whenever a text box contains the

icon on the bottom right, that means that entered values will be parsed as Airscript by default.

In the case of Labels, Airscript expressions can also be inserted into a string by applying double curly brackets around them. For instance, given some example_expression that returns Text, the output of the expression can be displayed seamlessly within the existing string:

Did this page help you?